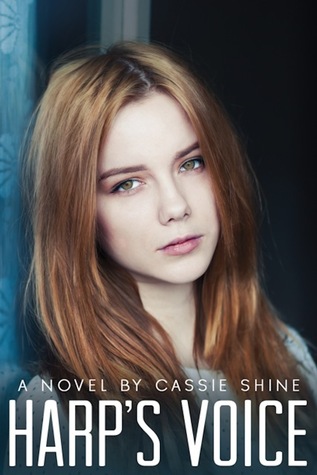 Single-minded to the point of near seclusion, Harp Evans’ only goal was to move away from her abusive mother, and start a new life at college. Now a freshman at a prestigious university, Harp continues to struggle letting people in, including her ex-boyfriend—Connor Williams—who has always stood by her, especially after her mother exposed a devastating secret about Harp’s origin.

While Harp figures out how to navigate her relationships, especially with her mom, Anne, she will have to exorcize her own demons and face challenges with uncompromising courage, including reuniting her broken family—the family that was shattered by the acts of one man.

After almost twenty years, is it possible for people to change their minds and open their hearts? More importantly, is Harp strong enough to pull them all back together?

After a long while, I finally read Harp’s Voice, which if you didn’t know is the sequel to Harp’s Song. I both the books in paperback from the author, which I am very grateful for. I think this book wasn’t as eventful as Harp’s Song. In this book we meet new people, find out new things about Harp and honestly I think this book was more of a emotional scene then another emotional scene rather than the last book where it was more getting to know Harp. At least thats how I see it. The character development was not bad and I think this book was a really great read. I would definitely recommend the first book to people who like dramatic contemporaries.

Wowowowowowow there is so much to talk about in this book I don’t know where to start. (I do actually.) So let’s start talking about the love birds themselves..Harp and Connor. Their relationship is probably the cutest. Like Harp’s grandpa said, they are just so comfortable to each other and being best friends for so long I think that kind of strengthen their relationship. I think they really took their dating relationship to the next level…like i’m stating the obvious here.

The ending of this book just left me in utter shock, happiness, and on the verge of tears. It was so unexpected and I think it was a great way to tie off this book. Meeting Anne’s family was another one of my favorite scenes because we get to read about her mom and dad and how they felt when Anne left. I honestly was really satisfied with their reaction to Harp coming to the house. As harsh as that may seem, they believed some guy that they knew for maybe 4 years or something over the daughter they raised. I think some of not believing Anne was for Ginny because it would break her. (But haha 19 years later with 3 kids she still gets her heart broken)

Lets talk about something happier now, the new characters! Harmony is probably a fun to roommate to have. She kind of reminds me of Phoebe from Friends with the hippie stuff, and yeah. I don’t know. It’s just funny how someone like Harp ended up with someone like Harmony. Then we have Logan whoooo is a great character to have in the book. When Harp was explaining how she was born I was laughing at him because now that we’ve been through Harp finding out about her dad and his reaction was just so…surprised. Of course I also felt bad for him because now he has another reason to dislike his dad even more. Then we finally meet the infamous Ginny. We didn’t get much out of her except for her slapping Alex but that was enough for me!

Aaaand here comes where I start telling you about why there should be another book. Hehe. Well first I want to know what happens to Harp after tell Alex to basically fudge off into his pit of jerky-ness. I guessing they start to become more of a family and live happily ever after. Yet there are so many questions. Will Ginny remarry? How will Logan’s younger siblings deal with this? What will happen to Harp and Anne? Will they move closer to her grandparents? Please have Connor and Harp get marry and live happily ever after. Do Emma and Ethan start dating Harmony and what-is-his-face? I mean I am totally willing to imagine, but I prefer to have a final story down so I can start reading and squealing.