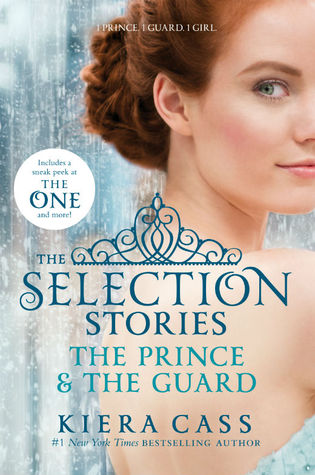 Two novellas set in the world of Kiera Cass’s #1 New York Timesbestselling Selection series are now available in print for the first time.The Prince and The Guard both offer captivating views into the hearts and minds of the two men fighting to win America Singer’s love. This collection also features exclusive bonus content, including a sneak peek at The One, the eagerly anticipated third novel in the Selection series.

Before America arrived at the palace to compete in the Selection, there was another girl in Prince Maxon’s life. The Prince opens the week before the Selection begins and follows Maxon through the first day of the competition.

Raised as a Six, Aspen Leger never dreamed that he would find himself living in the palace as a member of the royal guard. In The Guard, readers get an inside look at Aspen’s life within the palace walls—and the truth about a guard’s world that America will never know.

I recently read this on for Booktube-a-thon  and this brought back so many feelings to when I was reading the Selection trilogy again. This is something you need to read if you just finished the Selection trilogy and are craving so more. (I know [still] I am!) Kiera Cass did a great job with the writing and I really enjoyed this book.

Okay so I am going to be ranting about these books separately because…why not?

Yes! A book in Maxon’s eyes. So this novella was supposed to follow Maxon and Daphne. Okay so in the Selection the king does mention Daphne and I was dying to know more about it. Now if you don’t know I get very serious and defensive with my ships and couples. I’m very….sadistic….when it comes to this matter. I get very happy when there is a love triangle or another person and the person that is not my ship or couple is going to get laughed at when something bad happens to them. Call me cruel and mean but hey, I like my ships and couples to run smoothly. (And you might guess that The Selection did aggravate the crap out of me because of the multiple *ahem* relationships getting in my way of Maxon and America.) So anyway I saw this Daphne thing to be in my way of Maxon and America. call it the messing with time love triangle. A little of me felt bad because Daphne got rejected but Maxon couldn’t do anything because well, he was about to go into the Selection. Now I think it was a little unfair how Daphne was literally forcing Maxon to ask the king if he could marry Daphne and just call of the Selection. I understand that Maxon was wanting to but he wasn’t sure and well, was likely not going to do it. I just also didn’t like how Daphne was so mad and acting so sour puss before she leaves. At least she could have said good luck over the Selection. It also bothered me how she was so confident Maxon loved her. So the part after America comes and the Selection has started is when I start to like this novella. I loved reading about Maxon’s thoughts on America and how he would react to America’s sass and the ending. Oh the ending!

Ahhh. This book brings about memories of how annoyed I used to get with Aspen and how much I did like him. I still do. And it starts at Marlee’s canning. Wonderful. It was very interesting to see America running out in someone else’s perspective. I don’t have a lot to say about this novella because it was pretty good writing but a rant about Aspen should be saved for later. The one thing that frustrated me was during this novella Aspen still goes out for America and witnessing Marlee’s canning and still risks it. Even though it was for love he was still willing to risk it.

Kiera Cass graduated from Radford University with a degree in History. She grew up in South Carolina and currently lives in Blacksburg, Virginia with her family. In her spare time, Kiera enjoys reading, dancing, making videos, and eating unhealthy amounts of cake. You can learn more about Kiera at kieracass.com, follow her on twitter via @kieracass, and see her silly videos at YouTube.com/user/kieracass.

Hope you enjoy! Thanks for reading!