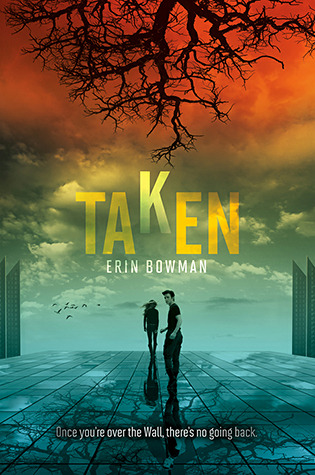 There are no men in Claysoot. There are boys—but every one of them vanishes at midnight on his eighteenth birthday. The ground shakes, the wind howls, a blinding light descends…and he’s gone.

They call it the Heist.

Gray Weathersby’s eighteenth birthday is mere months away, and he’s prepared to meet his fate–until he finds a strange note from his mother and starts to question everything he’s been raised to accept: the Council leaders and their obvious secrets. The Heist itself. And what lies beyond the Wall that surrounds Claysoot–a structure that no one can cross and survive.

Climbing the Wall is suicide, but what comes after the Heist could be worse. Should he sit back and wait to be taken–or risk everything on the hope of the other side?

YES. YES. YES. YES. This book was really good. It was just my cup of tea. Dystopian, _______, and, _________. [Blanked out for spoiler reasons. When you are done with book and have read it come back and look in the spoiler section.] There was so much suspense with this book. It is so fresh and ugh so good. This is a book you can sit down and finish it without realising that you sat there for 5 hours. I would definitely recommend this.

This book was dystopian, had a love triangle [I hate those but love reading about it], and had a rebellation. I HATE EMMA. My friend read this before me and she told me she would kill me if I was on Team Emma. I told myself I wouldn’t take sides until the ending of the book but the moment Gray walked into the room with Craw and Emma in bed I was disgusted. Emma just went screwing other people when she didn’t have proof that Grey was dead. And then when Bree and Gary kissed in front of Emma I was legit like “YA SEE THAT EMMA. YOU FEEL PAIN. ARE YOU WATCHING?”. I was also so happy that Bree and Gray finally kissed. I was also sad how Harvey died. Okay now to the serious stuff. Was anyone like *gasp* when we found out that Gray and Blaine were twins. I thought the mom was really clever for hiding Gray just to find out if the Heist was an actual part of living. Okay so the fact that Frank is the bad guy here is just Wah? Do you seriously need to rule an entire city just to convince everyone he is the good guy? [Which he is not so…..] In the beginning I thought he was good because I trust literally everyone who comes my way unless otherwise. Okay there are so many things I want to talk about. WE HAVE FOUND THE DAD! I was so excited about that because now we have the family somewhat complete. I was so sad how Own didn’t know that Sara died. He deserved to know earlier! Okay then we have Harvey who I thought was bad until I found out Frank was the creators. The Harvey dies and I was so sad about that. Harvey deserved to live!! I hate how Frank frames people for crimes. Ugh. Bree. I love Bree. She is my ideal girl. She’s badass, stubborn, and just a great fighter. The moment Bree found Bray in the water cave thingy I was like “SECOND LOVE INTEREST DETECTED!” and as we go to know Bree more I was totally on Team Bree. I just-ahhh- I just love them together.
Okay, more Harvey talk. This man….this man did not deserve to die. I liked Harvey so much…he DIDN’T NEED TO DIE!!!! Kale…Kale….Kale…she seems so cute..and so small….and innocent…..and precious…I need to know she is alive and okay. I felt so bad for Blaine and how he had to leave Kale when she was so small….So! Speaking of Blaine I was so excited to find out he was alive..and okay…and admit they were legit twins! Then we meet up with Blaine again and he get’s shot in the leg then he’s in coma for the rest of the book…UGGHHHH. BUT THEN HE WAKES UP….IN FRONT OF GRAY…YEEEAAAHHHH!! Okay let me talk about the plan. Honestly I thought the plan wasn’t very well thought through. It was just go to Taem, tell Frank Gray is Blaine, grab the vaccinations [And Emma] and while they all have that someway somehow still have Harvey. It did not go like that. Definitely not. I think it failed because they left Harvey to die but got the vaccinations and Emma. So the ending….this plan to find Group A. The fact that they had to bring Emma was just….MUUUHHH WHIIIIIEEEE????!?!?!!? So Frozen….this journey…I’M EXCITED!

One thought on “Let’s Talk!: Taken by: Erin Bowman”